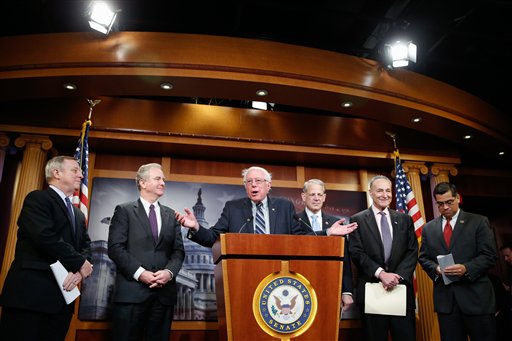 Watching Sen. Bernie Sanders hoarsely shouting his praises of Hillary Clinton at the Democratic National Convention — and knowing that the hacked emails of the corrupt Democratic National Committee (DNC) reveal its machinations to undermine Bernie’s campaign — did you wonder as I did why Bernie would be so servile? The Yiddish words schmuck and schlemiel come to mind.
I thought that Hillary probably bought Bernie off with promises of some plum assignment in her administration. But I should know better because the Clintons are nasty pieces of work who wouldn’t use the carrot when the stick is so much cheaper and more effective.
Reporting from the Democratic National Convention in Philadelphia, independent investigative journalist Wayne Madsen says Bernie Sanders was threatened with the loss of his ranking position on the Senate Veterans Affairs Committee if he did not endorse Hillary with enthusiasm.

Voting is beautiful, be beautiful ~ vote.©
Posted by BEVERLY TRAN at 10:44 AM