YouTube
Republican representatives Michele Bachmann (R-Minn.), Louie Gohmert (R-Texas), and Steve King (R-Iowa) held a press conference last week in Egypt, praising and thanking the Egyptian military for a July 3 ouster of what Bachmann called the "common enemy" Muslim Brotherhood.
Via the Washington Post's Max Fisher comes video of the press conference, which is bizarre, to say the least.
Bachmann thanked the Egyptian military for the coup and the military-led government's crackdowns on protests, implying that the Muslim Brotherhood — of which former Egyptian President Mohamed Morsi was a member — was responsible for the Sept. 11, 2001, terrorist attacks.
"We were cheering in front of our televisions back home in the United States,” Bachmann said, referring to when the Egyptian military overthrew Morsi. "We were cheering for you."
Bachmann, who took the lead in the press conference, said that the three members of Congress agreed that Morsi's ouster was not a "coup," but rather the "people of Egypt [giving] their voice loud and clear."
"Many of you have asked, Do we understand who the enemy is? We can speak for ourselves: We do. We have seen the threat that the Muslim Brotherhood has posed, here, for the people of Egypt," Bachmann said. "We’ve seen the threat that the Muslim Brotherhood posed around the world. We stand against this great evil. We remember who caused nine-one-one in America."
Their unconditional support is eyebrow-raising, to say the least. There is no reliable estimate of how many have been killed in the army-led crackdowns since Morsi's ouster, but estimates as of last week put the number somewhere between 1,000 and 8,000.
In response to the bloodshed, President Barack Obama has suspended a biannual joint military exercise, and has threatened pulling more military aid.
The full video is below:


Read more: http://www.businessinsider.com/michele-bachmann-louie-gohmert-steve-king-egypt-2013-9#ixzz2eMWCD2Ut
Voting is beautiful, be beautiful ~ vote.©
Posted by BEVERLY TRAN at 8:29 PM No comments: Links to this post 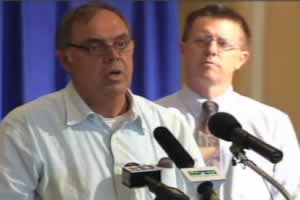 Maine Governor Paul LePage has distanced himself from two anti-gay activists attempting to defend his earlier Vaseline remark.
LePage, a Republican, has apologized for using a sexually vulgar phrase to describe how state Senator Troy Jackson, a Democrat, has, in his opinion, politicized the budget process.
“Sen. Jackson claims to be for the people, but he's the first one to give it to the people without providing Vaseline,” LePage told two reporters. “He is bad. He has no brains, and he has a black heart.”
In a press conference billed as a defense of LePage, anti-gay activists Michael Heath and Paul Madore commended LePage's remark.
(Related: At Maine rally against Question 1, Mike Heath claims being gay is “evil.”)
“It's addressing the issue of sexual orientation, directly related to the comment that the governor made, and nobody is defending the governor. We are defending the governor,” Heath told reporters.
A photo of a marine kissing his boyfriend during a homecoming with the caption “America's Future?” adorned the podium the men stood behind.
After the men equated homosexuality to pedophilia, a reporter asked Heath and Madore if they were concerned about being labeled as bigots.
“The reality is, don't you think we stopped to think about that? Do you think that would trouble us that people would be that shallow, that people would accuse us of being bigots?” Madore said. “The bulk of homosexuals practice pedophilia. There's a higher percentage of homosexuals that practice pedophilia.”
Governor LePage's office released a statement stating that the “group has no affiliation with the Office of the Governor or the Governor, nor do they speak for the Office of the Governor.”

Voting is beautiful, be beautiful ~ vote.©
Posted by BEVERLY TRAN at 11:04 AM No comments: Links to this post

I never thought it would happen this quickly, but one town in my home state is looking to fire the first shot in the war against the drones.
Actually, it's a little more political than the old "Terminator"-style man vs. machines scenario. The town of Deer Creek, Colo., is looking to begin offering "drone hunting licenses" and actually paying rewards to anyone who presents proof that they were able to bring down an unmanned aerial vehicle belonging to the United States federal government, according to reporting by Denver TV station KMGH.
Phillip Steel, the man who drafted the ordinance, as well as other supporters, say it will provide a new source of revenue for the town, but Steel concedes that it's not exactly like Deer Trail has a drone problem. In fact, he's never seen one over the town.
"This is a very symbolic ordinance," he told KMGH. "Basically, I do not believe in the idea of a surveillance society, and I believe we are heading that way."
That little bump of revenue could be nice, but I have to wonder if it will offset the various federal monies the town could stand to lose if Washington, D.C., gets wind of a place that's put out a bounty on federal property.While Steel seems to be dead serious about taking up arms against his own government, others in the tiny town see his novel move as a tongue-in-cheek way to drum up a little publicity and maybe some tourism and perhaps even a drone-hunting festival of some sort.
I grew up about an hour from Deer Trail and have passed it literally dozens of times on the highway. It's really easy to miss it, actually. But if next time, I find myself dodging stray buckshot while heading down Interstate 70, it's likely to make it a much more memorable place.
That said, if it turns out that Cylons have infiltrated the federal government, I know where I'm headed next to join the resistance. Watch the full report below and let us know in the comments what you think about the notion of drone hunting as a new 21st century sport.


Voting is beautiful, be beautiful ~ vote.©
Posted by BEVERLY TRAN at 10:58 AM No comments: Links to this post

Voting is beautiful, be beautiful ~ vote.©
Posted by BEVERLY TRAN at 10:55 AM No comments: Links to this post

Kevyn Orr on Serving as Emergency Financial Manager for Detroit

Voting is beautiful, be beautiful ~ vote.©
Posted by BEVERLY TRAN at 3:09 PM No comments: Links to this post

Baby LK recaps the week in news for the child protection industry. Voting is beautiful, be beautiful ~ vote.©
Posted by BEVERLY TRAN at 3:52 PM No comments: Links to this post

Baby LK recaps the week in news for the child protection industry. Voting is beautiful, be beautiful ~ vote.©
Posted by BEVERLY TRAN at 3:46 PM No comments: Links to this post

Voting is beautiful, be beautiful ~ vote.©
Posted by BEVERLY TRAN at 9:44 AM No comments: Links to this post

During a hearing this afternoon before United States District Judge Nancy Edmunds, Mayfield, 56, of Ft. Lauderdale, Florida, admitted that between 2006 and 2008, he had an agreement with the then city treasurer Beasley to pay bribes to Beasley and others to influence Beasley’s decisions as a trustee of Detroit’s Police and Fire Retirement System and General Retirement System.
Mayfield was the principal owner and chief executive officer of MayfieldGentry Realty Advisors L.L.C. (“MayfieldGentry”). MayfieldGentry was an investment advisor and fiduciary to the two Detroit pensionfunds overseeing a real estate investment portfolio worth more than $200 million of pension fund assets. According to Mayfield, Beasley agreed to maintain business for Mayfield’s company and to give Mayfield new pension fund business in exchange for cash others things of value. In particular, Mayfield gave $50,000 to the Kilpatrick Civic Fund. In addition, Mayfield paid for Beasley and others to take a trip to Las Vegas costing $60,000; paid for another private plane trip to Tallahassee, Florida, costing $24,000; paid for a private jet flight to Bermuda; and hired Beasley’s paramour to work at MayfieldGentry at Beasley’s request. Because of the pension fund business directed to MayfieldGentry by Beasley, Mayfield earned significant investment advisory fees from Detroit’s two pension funds.
United States Attorney McQuade said, “Detroit’s pension fund officials are entrusted to care for the retirement savings of the city’s employees, including police officers and firefighters. Officials who abuse their positions of trust for personal gain will be brought to justice.”
Robert Foley, Special Agent in Charge, Federal Bureau of Investigation said, “Those individuals who engage in pay to play schemes rob citizens of their right to honest government. The FBI-led Detroit Area Public Corruption Task Force is committed to stopping these illegal acts.”
Based on his guilty plea and felony conviction for conspiring to pay bribes, Mayfield is facing a maximum of five years in prison and a fine of up to $250,000.
A criminal indictment is pending against Beasley and against Roy Dixon, a former investment advisor to the two pension funds who paid bribes to Beasley and other officials and who embezzled millions from the funds.
In addition, a number of other defendants have been convicted in relation to the pension fundinvestigation, including (1) Monica Conyers, a former trustee of the General Retirement System and former member of the Detroit city council, for conspiracy to take bribes, including bribes relating to a proposed multi-million-dollar pension fund investment in Wireless Resources and a $10,000 extortion payment relating to the Police and Fire Retirement System’s investment in the Romulus Deep Injection Waste Well; (2) Samuel L. Riddle, Conyers’ chief of staff, for conspiracy to commit bribery and extortion relating to the Wireless Resources and Romulus Deep Injection Well investments; (3) DeDan Milton, a former trustee ofDetroit’s two pension funds; (4) Andrew Park, an owner of Asian Village, who paid a bribe to obtain a $2.75 million loan from Detroit’s General Retirement System; and (5) Derrick Miller, former chief information officer of Detroit, who accepted the bribe from Park and who took a kickback of more than $500,000 on a $44 million investment by Detroit’s two pension funds.
The case was investigated by agents of the Federal Bureau of Investigation, the Internal Revenue Service, and the Department of Labor. It is being prosecuted by Assistant United States Attorneys Robert Cares and David A. Gardey.

Voting is beautiful, be beautiful ~ vote.©
Posted by BEVERLY TRAN at 9:07 AM No comments: Links to this post

Ever wonder why the government seems fine with cutting unemployment benefitsand welfare programs?
Part of the answer may be that the rich vote more than the poor. Seventy-eight percent of Americans making over $150,000 per year voted in the 2008 election, while less than half of those making under $30,000 per year voted.
Check out this chart from the left-leaning think tank Demos: You can read Demos' full report on the rich's influence on politics here.
Stacked Deck: How the Dominance of Politics by the Affluent &amp; Business Undermines Economic Mobility in America by
Posted by BEVERLY TRAN at 8:18 AM No comments:

Businessweek Warns That Minorities May Be Buying Houses Again

Businessweek Warns That Minorities May Be Buying Houses Again

Bloomberg Businessweek is a genuinely great magazine that does an amazing job of making business and economics news accessible and interesting, but this way of illustrating a cover story about the return of aggressive mortgage lending products is really something else.
The idea is that we can know things are really getting out of hand since even nonwhite people can get loans these days! They ought to be ashamed.
Update, 1:48 p.m.: Bloomberg Businessweek "apologizes" with a pretty categorical non-apology:

"Our cover illustration last week got strong reactions, which we regret," Josh Tyrangiel, the magazine's editor, wrote in a statement sent to POLITICO. "Our intention was not to incite or offend. If we had to do it over again we'd do it differently."

Note that Tyrangiel doesn't say they regret publishing the actual content of the cover, but the "strong reactions" that it incited. How hard is it to take responsibility for the cover, say sorry, and leave it at that?
Read more context on the controversy here.
Posted by BEVERLY TRAN at 6:11 PM No comments: