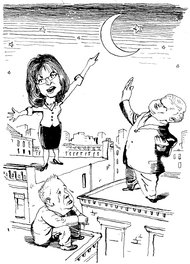 THE “ground zero mosque,” as you may well know by now, is not at ground zero. It’s not a mosque but an Islamic cultural center containing a prayer room. It’s not going to determine President Obama’s political future or the elections of 2010 or 2012. Still, the battle that has broken out over this project in Lower Manhattan — on the “hallowed ground” of a shuttered Burlington Coat Factory store one block from the New York Dolls Gentlemen’s Club — will prove eventful all the same. And the consequences will be far more profound than any midterm election results or any of the grand debates now raging 24/7 over the parameters of tolerance, religious freedom, and the real estate gospel of location, location, location.
Fred R. Conrad/The New York Times

Here’s what’s been lost in all the screaming. The prime movers in the campaign against the “ground zero mosque” just happen to be among the last cheerleaders for America’s nine-year war in Afghanistan. The wrecking ball they’re wielding is not merely pounding Park51, as the project is known, but is demolishing America’s already frail support for that war, which is dedicated to nation-building in a nation whose most conspicuous asset besides opium is actual mosques.

So virulent is the Islamophobic hysteria of the neocon and Fox News right — abetted by the useful idiocy of the Anti-Defamation League, Harry Reid and other cowed Democrats — that it has also rendered Gen. David Petraeus’s last-ditch counterinsurgency strategy for fighting the war inoperative. How do you win Muslim hearts and minds in Kandahar when you are calling Muslims every filthy name in the book in New York?
Posted by BEVERLY TRAN at 4:56 PM No comments: Links to this post

Posted by BEVERLY TRAN at 2:42 PM No comments: Links to this post

Stanley F. Druckenmiller, who earlier this month announced plans to close his hedge fund, Duquesne Capital Management LLC, will join the ranks of other business titans, including Microsoft co-founder Bill Gates and former Citigroup chair Sanford "Sandy" Weill, who stepped away from the business world while at the top of their game to devote more time to philanthropy, Bloomberg reports.

Over the past dozen years, the billionaire hedge fund manager, who made his mark as the lead portfolio manager for George Soros's Quantum Fund, has given to a range of nonprofit organizations through his family foundation. Recent grantees include Human Rights Watch, Teach for America, the National Fish and Wildlife Foundation, and the Harlem Children's Zone, which in 2006 received $25 million from the foundation in support of its work to provide a comprehensive set of educational, social service, and community-building programs to thousands of low-income children and families in the Harlem neighborhood; Druckenmiller currently serves as board chair of HCZ.

Last year, Druckenmiller, who ranked number 354 on the 2010 Forbes 400 list with an estimated net worth of $2.8 billion, transferred $700 million of his own money to the foundation, earning him the top spot in the Chronicle of Philanthropy's annual list of largest individual charitable givers.

"When someone has transferred a lot of wealth to their foundation, they're sending a clear signal," Patrick Rooney, executive director of the Center on Philanthropy at Indiana University, told Bloomberg. "They're moving from success to significance."

Glenn Beck: Obama's Not A Racist -- It's His Religion That's The Problem (VIDEO)

Posted by BEVERLY TRAN at 1:36 PM No comments: Links to this post

The Billionaires Bankrolling the Tea Party

Posted by BEVERLY TRAN at 8:42 AM No comments: Links to this post

Congresswoman Michele Bachmann is giving supporters a mouthful this summer and somehow mega-popular Irish band U2 have become entangled in her "facts". She has been caught on tape confusing the rockers with attack submarines while invoking the memory of four chaplains who went down with a troop ship Dorchester in 1943.

German subs were were nicknamed "U boats" because of their "U" classification by the German navy. The U-223 struck the Dorchester off Newfoundland, and it sank in less than 30 minutes. Hundreds of men died. The chaplains sacrificed their life preservers so that GIs might live.

Is anyone surprised Bachmann's mangling military history again? After all, this is the congresswoman who used the failed Charge of the Light Brigade as a rallying cry for tea party victory.

When it comes to a grasp of history, Bachmann still hasn't found what she's looking for.
Posted by BEVERLY TRAN at 11:49 AM No comments: Links to this post

Email ThisBlogThis!Share to TwitterShare to FacebookShare to Pinterest
Labels: Michele Bachmann, Minnesota, U2

Posted by BEVERLY TRAN at 11:58 AM No comments: Links to this post

Email ThisBlogThis!Share to TwitterShare to FacebookShare to Pinterest
Labels: war on drugs

Nevada Republican Senate candidate Sharron Angle once partook in a campaign against a local high school's use of black football jerseys, arguing that the dark color was ungodly and Bill Roberts of Nevada's Pahrump Valley Times recently reported.
Posted by BEVERLY TRAN at 7:36 AM No comments: Links to this post

99er Responds To Glenn Beck: 'You Couldn't Get More American Than Me'

99er Responds To Glenn Beck: 'You Couldn't Get More American Than Me'

On Monday, Fox News host Glenn Beck criticized unemployed activists who protested on Wall Street to demand an extension of unemployment benefits beyond the 99 weeks available in some states, specifically calling out one Connie Kaplan.

"Ninety-niner Connie Kaplan asked, 'Are you going to tell us, Mr. President and Congress, that our lives are not worth saving?'" Beck said. "Connie, here's an idea. I'll save your life. Don't spend your remaining money on travel to get to a protest. Go out and get a job. You may not want the job. Work at McDonald's. Work two jobs."

Kaplan told HuffPost she was "appalled" by Beck's suggestion that she'd rather not work -- before the economic collapse, she said, she did work two jobs in Florida. "I was a customer service warranty specialist for a company that manufacturers luxury coaches -- tour buses, fancy ones," she said, adding that she also worked as a real estate agent. After losing the customer service job, she moved from Florida to New York to stay with her daughter.

She said she spent $2.25 on subway fare to get to the protest and is constantly looking for a job. "I just want an honest day's work... I've tried everything you can imagine," she said. As for Beck's suggestion that his viewers might be ashamed to call 99ers American, Kaplan said, "You couldn't get more American than me. I'm the daughter of an immigrant and I grew up in Brooklyn."
Posted by BEVERLY TRAN at 7:32 AM No comments: Links to this post

Here’s the kind of discourse that Republicans in state Senate District 56 are interested in: The party website is now running a video about how “hot” Republican women are compared to “Democrat [sic] women.” To the strains of Tom Jones’ “She’s a Lady,” the video runs through a series of photos of GOP women in bikinis, evening gowns and, in Sarah Palin’s case, Spandex. Then the Dems: women like Rosie O’Donnell, Janet Reno (pictured), Nancy Pelosi and Madeleine Albright — set to the song, “Who Let The Dogs Out?”

Posted by BEVERLY TRAN at 11:22 AM No comments: Links to this post

Posted by BEVERLY TRAN at 7:14 AM No comments: Links to this post

Christina Romer, chairwoman of Pres. Obama's Council of Economic Advisers, has decided to resign, according to a source familiar with her plans.

Romer, an economics professor at the University of California (Berkeley) before taking the key admin post, did not respond to repeated calls to her office.

"She is ostensibly the chief economic adviser, but she doesn't seem to be playing that role," the source said. The WH has been pounded for its faulty forecast that unemployment would not top 8% after its economic stimulus proposal passed.

Instead, the jobless rate is 9.5%, after exceeding 10% last year. It was "a horribly inaccurate forecast," said Bert Ely, a banking consultant. "You have to wonder why Summers isn't the one that should be taking the fall. But Larry is a pretty good bureaucratic infighter."
Posted by BEVERLY TRAN at 7:46 AM No comments: Links to this post

"The Lord told me to hate Obama"

Posted by BEVERLY TRAN at 7:11 AM No comments: Links to this post

The Republican congresswoman from Minnesota formed the Tea Party Caucus in the House last month, increasing her visibility as a leader among the Tea Party faithful. Then she filed papers last week to start her own political action committee, MichelePAC, something befitting a person with a national following. She’s now signaled to Tea Party leaders that she’ll sign the Contract from America, a list of legislative priorities from Tea Party activists that’ll endear her even more to the movement that sees her as a rock star.

Read more: http://dailycaller.com/2010/08/10/tea-party-sees-national-role-for-minnesota-rep-michele-bachmann/#ixzz0wELEDVug
Posted by BEVERLY TRAN at 11:56 AM No comments: Links to this post

PETITION: STAND WITH ME TO SAVE NET NEUTRALITY AND STOP THE CORPORATE TAKEOVER OF OUR MEDIA

PETITION: STAND WITH ME TO SAVE NET NEUTRALITY AND STOP THE CORPORATE TAKEOVER OF OUR MEDIA

Posted by BEVERLY TRAN at 2:04 PM No comments: Links to this post

What a mess the Senate has made of H.R. 1586. It’s a package of spending and revenue measures—but we’ll ignore the substance for now because they have so utterly goofed up the name.

As we noted here before, this is a “shell bill.” It was introduced as one thing (TARP taxes), became another thing (an aviation bill), and is now a batch of spending policies. (Cost: about $125 per family)

snafuThe most recent version of the bill was produced when the Senate passed a “substitute amendment.” That’s an amendment that clips out everything in the bill and puts in all new text.

In the House and Senate, they often publish amendments ahead of time, and it looks like someone was in a rush to get the amendment together, because they left blank lines where the new name of the bill should have been.

Take a look for yourself. Down toward the bottom of this page in the Congressional Record, it says, “SECTION 1. This Act may be cited as the “_______Act of______”. (The Library of Congress’ Thomas reporting system picked that up as the “XXXXXXAct ofXXXX,” so that’s how it shows up on our site.)

oopsAnd that’s the way it might be signed into law.

You see, the Constitution requires both Houses of Congress to pass identical bills before they can be sent to the president and signed into law. The Senate has left town for the rest of August, and the House is coming back next week to put its stamp of approval on the bill.

President Obama wants to sign it quickly—the bill is already up on the Whitehouse.gov “pending legislation” page (though posting it there before the bill passes Congress doesn’t count as Sunlight Before Signing). So the House has to approve this bill, with the name “_______Act of______.”

The only other alternative is for the House to change the name and have the Senate come back for another vote.

Congress seems always to be hustling to get things done—even when it’s spending billions of taxpayer dollars. This time, they were hustling so fast to get the money moving that they couldn’t take the time to give the bill a proper name.

Whose problem is this? Yours! You voted these folks in!
Posted by BEVERLY TRAN at 7:56 AM No comments: Links to this post