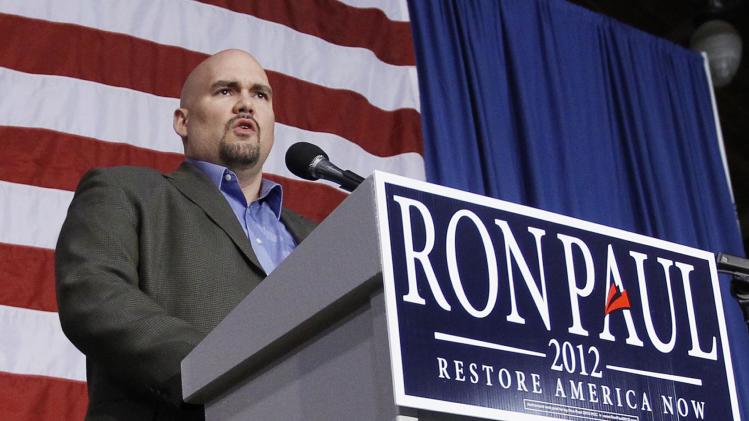 Kent Sorenson said he was paid $73,000 to switch his allegiance from Michele Bachmann to Ron Paul in 2011


A former Iowa state senator who abandoned then-presidential candidate Michele Bachmann to endorse Ron Paul a week before the 2012 Iowa caucuses has pleaded guilty to “concealing payments” from Paul’s campaign in exchange for his support, the Department of Justice announced Wednesday.
In December 2011, state senator Kent Sorenson, then the Iowa chairman for Bachmann’s campaign,made a surprise announcement that he had switched his endorsement to Paul. At the time, Sorenson said he made the decision based on his support for Paul’s policies, but this week he admitted to accepting tens of thousands of dollars from the Paul campaign as part of the deal. According to a DOJ release, “from October to December 2011, he met and secretly negotiated with a second political campaign to switch his support to that second campaign in exchange for concealed payments that amounted to $73,000.”
The payments were delivered in $8,000 installments, which were “concealed by transmitting them to a film production company, then through a second company, and finally to Sorenson and his spouse,” the DOJ statement read.
“An elected official admitted that he accepted under-the-table payments from a campaign committee to secure his support and services for a candidate in the 2012 presidential election,” DOJ Assistant Attorney General Caldwell said in a written statement.
Paul, a Texas Republican who retired from Congress in 2013, went on to place third in the state caucuses behind Rick Santorum and Mitt Romney. He continued to campaign through the spring and ended his run in May 2012. Paul’s son, Kentucky Republican Sen. Rand Paul, is considering his own bid for the presidency in 2016.
The consequences for those involved with Paul’s campaign are unclear. Jesse Benton, a Paul campaign spokesman at the time, did not return a request for comment. Benton is currently the campaign manager for  Kentucky Republican Sen. Mitch McConnell, who is running for re-election.
In an interview with Yahoo News, DOJ spokesman Peter Carr declined to discuss details of the agreement but said that the investigation “remains ongoing.”
Sorenson resigned from his office in 2013 amid allegations that he had also taken illegal contributions from a political action committee aligned with Bachmann.

Voting is beautiful, be beautiful ~ vote.©
Posted by BEVERLY TRAN at 8:49 AM No comments: Links to this post

Rick Perry Turns Himself In

Rick Perry Turns Himself In


Texas Gov. Rick Perry (R) turned himself in to authorities Tuesday on counts of abuse of official capacity and coercion of a public servant.
Perry was indicted Friday for allegedly abusing the powers of his office by carrying out a threat to veto funding for state prosecutors investigating public corruption.
Before being booked, Perry said he stood by his decision.
"This issue is far bigger than me. It's about rule of law, it's about the Constitution that allows not just the governor but every citizen to speak their mind, free of political interference or legal intimidation," Perry said.
"I'm going to fight this injustice with ever fiber of my being, and we will prevail," he said.


Voting is beautiful, be beautiful ~ vote.©
Posted by BEVERLY TRAN at 7:54 PM No comments: Links to this post

But after being stripped of all the things that come with the Majority Leader position — a police detail that drives him around, extra staff, and a big office — Cantor announced his last day as a member of the House will be August 18.Voting is beautiful, be beautiful ~ vote.©“We’re looking at possibly one of the most anti-Hispanic Congresses in generations,” said Rep. Joe Garcia (D-FL) to reporters in the U.S. Capitol yesterday.
With Reps. Michelle Bachmann (R-MN) and Steve King (R-IA) in charge of strategics, House Republicans voted last night to deport over 500,000 people.  Since August 2013, 550,000 people have applied for Deferred Action.  At 8:30 p.m. last night, two hundred and twelve Republicans in the House voted in favor of ending the program.
The anti-Deferred Action bill has zero chance of becoming law.  Yesterday’s events were political “message vote” games with election day 95 days away.  No member of Congress had actually seen the final bill voted on until hours before votes were called.
Consistent with a GOP controlled House with a thin schedule that has passed fewer bills than any other in history, another answer to a problem facing the country was met with doing nothing.  Or more specifically: Passing D.O.A. political statement legislation everyone knows will never become law.  But a serious problem remains: Officials in Texas are quickly running out of money to deal with the number of immigrants crossing the border from Mexico.

Last night’s efforts were part of an odd and ill-timed anti-immigrant vote led by the right wing of the Republican party.  Despite all the talk at the beginning of 2013 of the GOP’s need to “expand the party” after Gov. Mitt Romney lost to President Obama in 2012 House Republicans sounded more like the party of the past than of the future during yesterday’s debate.
It’s “like I ordered if off the menu,” said Rep. Steve King (R-IA) on the anti-Dreamers bill.  That Rep. King was the lead-author of the anti-Deferred Action bill is telling since Rep. King is known for his racist comments against Hispanic immigrants.
“For everyone who’s a valedictorian, there’s another 100 out there that weigh 130 pounds and they’ve got calves the size of cantaloupes because they’re hauling 75 pounds of marijuana across the desert,” Rep. King said in June 2013.  Last August at a Tea Party rally, King said,”if you bring people from a violent civilization into a less-violent civilization, you’re going to have more violence right?”
That immigrants from Mexico are often spoken of within the context of criminality by House Republicans was not lost on Rep. Luis Gutierrez (D-IL). At a press conference on Capitol Hill yesterday, he said that, “GOP leaders embraced “the least common denominator of hatefulness toward the immigrant community” with the King-Bachmann anti-Dreamers bill.
Speaking on the GOP’s references to Mexican immigrants, Gutierrez said that, “for weeks … they have said that they are disease-ridden, lice-filled, gang bangers, drug dealers and mules of the drug cartels who have come here in hoards to invade our nation… And now they are demonstrating that that’s how they feel in their legislation.”
“It sends a vitally important message that minors wanting to come here in the future will … have absolutely no opportunity to receive DACA benefits,” said House Judiciary Chairman Bob Goodlatte (R-VA).  During the 113th Congress, Goodlatte has failed to move on the Senate passed immigration bill.
Four Democrats voted with Republicans: Reps. Collin Peterson (D-MN), Mike McIntyre (D-NC), John Barrow (D-GA), and Nick Rahall (D-WV).  Among the eleven Republicans voted with Democrats and against the right wing Bachmann/King anti-Dreamer bill were:  Reps. Mario Diaz-Balart (R-FL),  Jeff Denham (R-CA), Cory Gardner (R-CA), and Ileana Ros-Lehtinen (R-FL).
“This is one of the most mean-spirited and anti-immigrant pieces of legislation I have seen in all my years of Congress,” said Rep.  John Conyers (D-MI) who has been in Congress for 49 years.
Outgoing House Republican Majority Leader didn’t bother to vote.  Making no attempt to prove the Eric-Cantor-haters like Laura Ingraham wrong, Cantor made none of the immigration related votes last night.  Cantor lost his House seat in large part because of his moderation on the issue.
Posted by BEVERLY TRAN at 10:21 PM No comments: Links to this post

Peggy Noonan: America is divided because Obama is “out there dropping his g’s”


Peggy Noonan: America is divided because Obama is “out there dropping his g’s” Peggy Noonan is worried about America. Again. The Wall Street Journal columnist’snewest worry arises, as is so often the case, from “a conversation this week with an acquaintance of considerable accomplishment in the political and financial worlds” who thinks America is going to break apart into red and blue factions. “I think a lot about the general subject of what deeply divides us,” Noonan writes, “occasionally with a feeling of some alarm.”
Like any pundit worth her salt, Noonan assumes that her own personal sense of alarm is shared by the country as a whole, and after many paragraphs of gauzy ruminations on the nature of political division, she finally arrives at her point: “No nation’s unity, cohesion and feeling of being at peace with itself can be taken for granted, even ours. They have to be protected day by day, in part by what politicians say. They shouldn’t be making it worse. They shouldn’t make divisions deeper.”
And who are we to blame specifically for these deepening divisions?

In just the past week that means:
The president shouldn’t be using a fateful and divisive word like “impeachment” to raise money and rouse his base. He shouldn’t be at campaign-type rallies where he speaks only to the base, he should be speaking to the country. He shouldn’t be out there dropping his g’s, slouching around a podium, complaining about his ill treatment, describing his opponents with disdain: “Stop just hatin’ all the time.”

Ah, that divisive Obama, busting apart the country’s delicate sense of common unity by employing relaxed diction when chastising House Republicans for VOTING TO SUE HIM. That lawsuit was the “ill treatment” that Noonan apparently believes is a less of a contributor to the country’s intractable partisan divide than Obama’s momentary dips into colloquial modes of speech. The larger point Obama made was that Republicans should be more constructive partners in the governing process. Given yesterday’s embarrassing spectacle in which internal GOP divisions forced the leadership to cancel a vote on their border crisis legislation, you have to think the president might be on to something there.

Voting is beautiful, be beautiful ~ vote.©
Posted by BEVERLY TRAN at 1:27 PM No comments: Links to this post

Voting is beautiful, be beautiful ~ vote.©
Posted by BEVERLY TRAN at 1:02 PM No comments: Links to this post