If Susan B. Anthony was a lesbian,

and Michele has a strong aversion to lesbians, 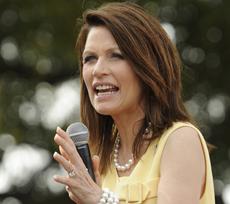 The Minnesota congresswoman disclosed the miscarriage Wednesday night at a town hall meeting in South Carolina, according to CNN and Politico, in response to a question about abortion.

"After our second was born, we became pregnant with a third baby," Bachmann said, referring to her husband, Marcus. "It was an unexpected baby, but of course we were delighted to have this child. The child was coming along and we ended up losing our child. And it was devastating to both of us, as you can imagine if any of you have lost a child."

Bachmann said the experience "changed us forever," leading her and her husband to help raise 23 foster children along with five biological children. She frequently discusses her children on the campaign trail, such as when she introduced herself to the nation during the first GOP presidential debate in New Hampshire.

"We made a commitment that no matter how many children were brought into our life, we would receive them because we are committed to life," Bachmann told the South Carolina audience.

Bachmann recently signed an anti-abortion pledge by the Susan B. Anthony List, which states that candidates will appoint judges and Cabinet officials who are against abortion, sign legislation banning abortion after 20 weeks of pregnancy, and cut off taxpayer funding for Planned Parenthood.

Romney, who once supported abortion rights but now does not, has said the pledge would have unintended consequences.
Posted by BEVERLY TRAN at 8:01 AM